Shot, blinded or beaten: the high cost of protesting in Chile

UTS’ student Tys Occhiuzzi is in Chile, where he’s been filing updates for Central News on the country’s civil unrest. In his latest report, he speaks to a protestor who has payed dearly for taking on the government.

In October, Diego Foppiano Jara joined millions across Chile to protest against the severe wealth gap crippling his country.

After just five minutes at a demonstration in his Santiago neighbourhood, he was shot in the eye.

The rubber-coated lead pellet fired by police left him half blind for the rest of his life. He cannot go to university and suffers ongoing psychological trauma.

Diego’s case is not unique against the backdrop of Chile’s protests, which are now in their third month. According to the United Nations Mission to Chile, 352 people have suffered eye injuries in the protests. At least two people have been blinded in both eyes.

Chile’s Medical College and the Chilean Ophthalmology Society have declared that more people have lost their eyes during the country’s unrest than in any other case of social turmoil in the world.

Twenty-six people have died in the protests since mid-October.

The UN has heard allegations of deaths from gunshot wounds; victims being beaten to death by police; and protesters run over by military vehicles. Nearly 5000 people have been injured, with a further 28,000 jailed between October 18 and December 6.  Many arbitrarily, the UN says.

It has found that the majority of these victims were young people exercising their right to assembly and it alleges that the police and military used a disproportionate level of lethal and non-lethal force, including the use of tear gas close to hospitals and schools. 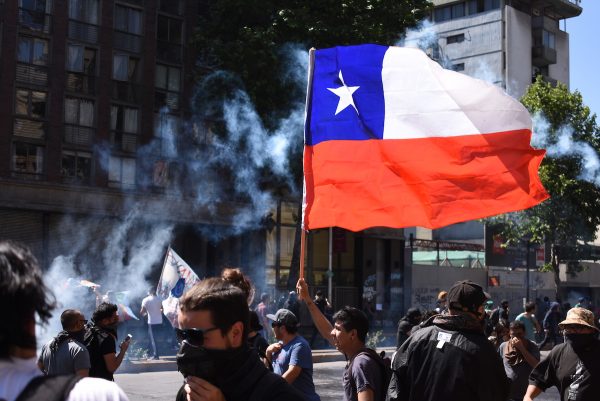 The report refers to 133 specific cases of torture, which include beatings in detention, but also psychological torture such as death threats, threats of rape, threats to “disappear” the victim, and beatings of family or friends in front of the victim.

The UN also highlights 24 cases of sexual violence perpetrated by the army and police. However, Chile’s national human rights watchdog has filed criminal complaints relating to hundreds of other cases.

These potential violations of international human rights have led the United Nations to recommend that members of the national police and army should be prosecuted.

In response, the Ministry of the Interior says over 2700 members of security forces have been injured. It lists 243 separate attacks on police stations, as well as 130 of Santiago’s 136 metro stations.

How the protests started

Since its transition to democracy, Chile has earned the reputation of being one of South America’s most stable and prosperous nations. But Augusto Pinochet’s military dictatorship has left a fundamental impact on the country.

Subsequent governments have not effectively responded to Pinochet’s hard-line neoliberal economic agenda, which was implemented until his removal from office in 1990. Wealth in Chile remains highly concentrated with 10 per cent of the population owning over two thirds of the country’s wealth.

On October 19, at the beginning of the protests, Chile’s billionaire conservative president Sebastián Piñera, addressed the nation, saying: “we are at war against a powerful enemy”, before announcing a military curfew and national state of emergency.

This only galvanised protestors, and reached a climax on October 25 when over a million people took to the streets of Santiago. The government has since estimated that the protests have caused more than 4.3 billion dollars in damages across Chile.