From product design to public relations, university students often work as “consultants” for “client” companies – providing fresh ideas in exchange for course credits and in the hope they might land a job. But students don’t always understand the legal agreements they’re expected to sign, as Matthew Hodges reports.

When Ben Mitchell was a university student, he was given the opportunity to work with one of Australia’s biggest retail giants as part of his degree in product design.

The brief: create an innovative sports product and it could appear on store shelves and in Christmas catalogues by the end of the year.

So Ben designed “BrightBall” (pictured above) – a computerised soccer ball that lights up and changes colour as you train and “level up”.

When he was in his third and final year at the University of Technology Sydney (UTS), Ben hoped to work directly with that same company to take his idea further. Instead, students enrolled in another subject were offered that chance – something Ben only discovered later, through friends.

“They showed us Ben’s presentation boards and we were all kind of like; ‘Cool, Ben’s project’s been taken forward’. Someone messaged him to say congrats… but he had no idea they were using his concept.”

The class was given two options – take part in a design competition, or work with the company. If they chose the latter, they could work either on a separate brief devised by the university – or on Ben’s prototype.

Some students refused to work on the prototype. Others, like Lauren Addison, didn’t know Ben was in the dark until “a few of the students worked it out and confronted the lecturers”.

“There wasn’t much time to push back as it was such a short subject,” she explains.”None of us heard back again regarding our projects.”

Yana Burton also put her hand up to work on Ben’s prototype.

“They were looking at furthering his concept… another level closer to production,” she explains. “They wanted two groups to go against each other to try to better his design.”

Complicating matters was the fact that students were asked to sign a non-disclosure agreement, which prevented them from sharing material.

“They definitely told us not to tell anyone, including other students.

“After the class I spoke to the tutor to ask if Ben knew and the tutor told me it wasn’t my business. [He said that] I just need to focus on my stuff and Ben can ‘fight that fight’ if he wants.”

By default, undergraduate students retain ownership of ideas they create. That’s why they are sometimes asked to sign Intellectual Property (IP) agreements, which can re-distribute ownership and usage rights.

Students in the design subject were asked to:

“… hereby grant to UTS a non-exclusive, royalty free, worldwide, irrevocable, perpetual licence to use the work for any purpose relating to or connected with offering or running the subject.”

UTS product design lecturer and subject coordinator Stefan Lie, acknowledges that Ben’s design was given to another class to take further.

“There was never any intention to take any work or not credit the student,” Mr Lie said, adding that displaying Ben’s name on the PowerPoint was a way of crediting him.

While Ben had previously signed an IP agreement, it was apparently one of his social media posts that gave UTS the licence to take it further.

“The reason it was used in the first place was because it had been in the public domain, so it could no longer be protected anyway.”

“The only problem was, and that’s our mistake, it was never clearly communicated to him what his work was being used for.”

Mr Lie says he understands why students were confused and concerned about what they were signing.

“All of a sudden, you get an agreement put in front of you and you realise the things you are designing are potentially of value. So you… think twice about signing these rights away.

This was the first and last time we ever did this.

He maintains the company’s intention was not to commercialise Ben’s idea.

“If they were commercialising something they had done in our subject, they would have to tell us. And we still communicate with them.”

Ultimately, he explains, the company couldn’t anything anyway – because roughly half of the students refused to sign the IP agreement.

“We couldn’t go through with it. In a project like that, if not everybody in the group signs the agreement it’s null and void.

“This was the first and last time we ever did this. It was just too hard on everybody.

“Now, every time at the beginning of the semester, we say in the lectures: ‘Anything you create here is automatically yours.’ Just so it’s clear.”

But UTS is just one of many universities encouraging industry collaborations, as this video explains.

Fourth-year student Jessica Respall, was given her first legal agreement for an industry partnership at the start of 2019: “I read it, but I don’t understand legal terms that much.”

She says the faculty advised students to consult the university’s free student legal service if they had any concerns, and to negotiate with the company if they wished.

“In the end we just needed to sign it over. Everyone else had signed it.”

“It’s up to the student to decide if they’re happy with [the agreements] but it can be a bit problematic when a student has little ability to negotiate anything different to what’s presented to them,” he said.

“The difficulty is, if they’ve already started the course, their bargaining position’s not strong. If the other [parties]… say ‘nup’ then what do they do?”

Mr Blaxell says it is rare to encounter agreements that allow students to retain ownership of ideas presented to a company.

“It’s not that common to keep it. [For] some placements…  that BCII (Bachelor of Creative Intelligence and Innovation) are doing [they] have tried to negotiate… [but] some organisations aren’t prepared to let students retain IP.” 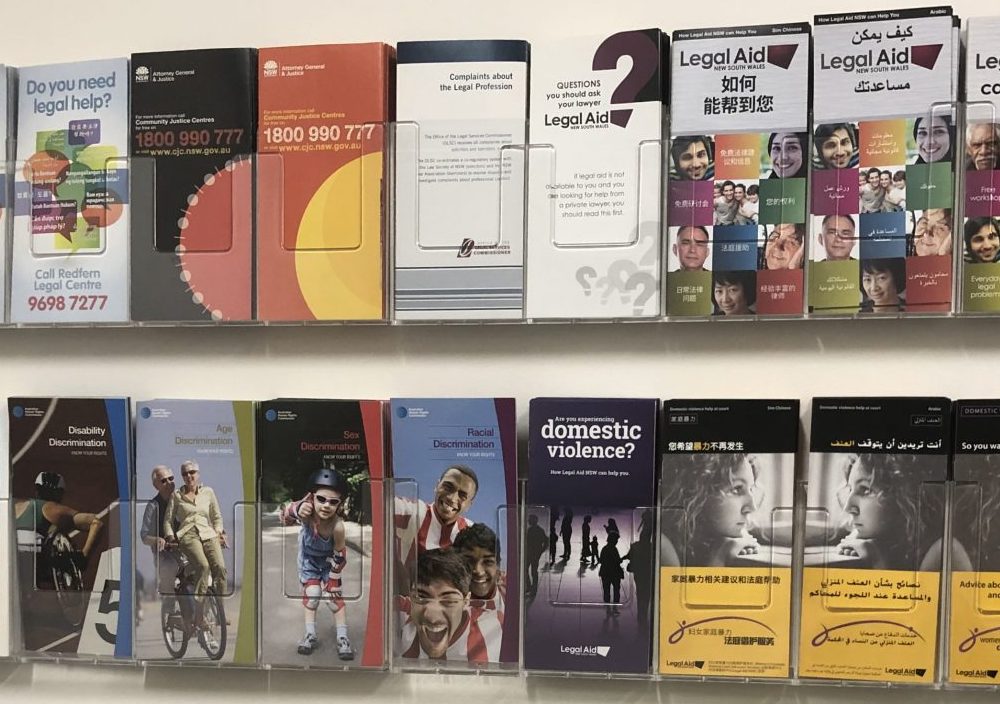 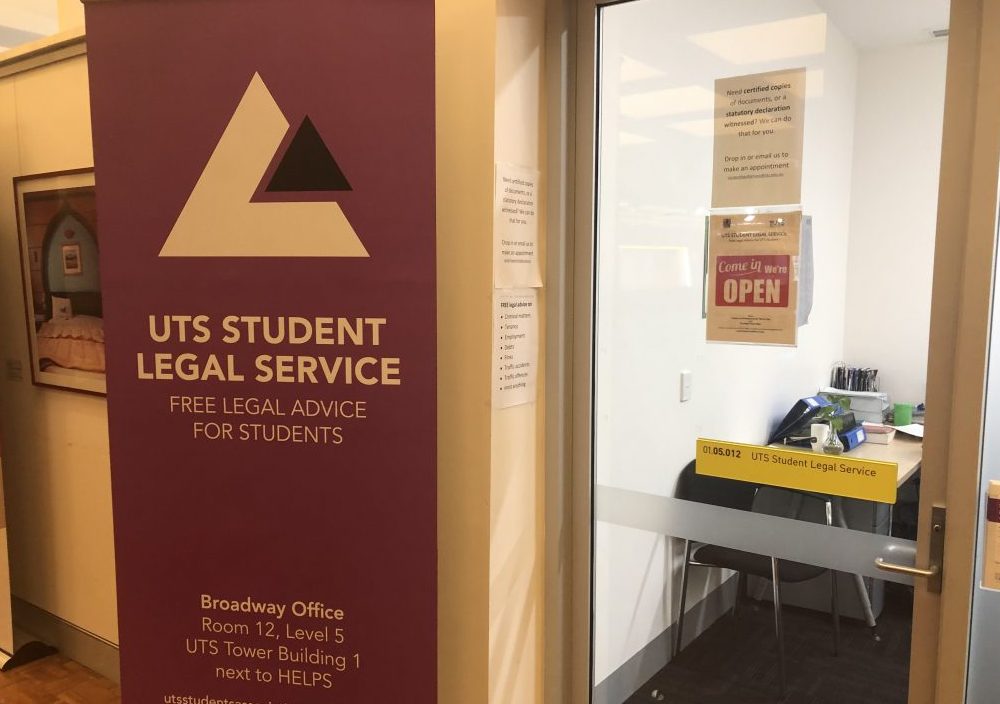 But it is limited in the advice it can give for UTS-related issues (Photo: Matthew Hodges)

Jessica says she has worked directly with companies throughout every semester of her BCII degree.

The course is part of a double degree and involves students from different disciplines coming together to confront industry problems. They then pitch their solutions to companies.

Now in her fourth and final year, Jessica wonders what happened to the ideas she presented.

“We do so much free work. People say it all the time. We’re working so hard, and we’re not really sure what’s coming out of it.”

“[There’s] definitely a power dynamic in the fact that [while] we can write their company name on our resume, [it] doesn’t mean we’re going to get a job. But we’ve given them tangible insights they could definitely use to put into a product and make money.”

Jessica says her latest industry partners “really liked” her project – a Chrome extension for home-buyers called Splash – and they met multiple times to discuss how it might be executed. Then, she heard nothing.

If they are taking it further we just don’t know about it.

She signed an NDA but not an IP agreement, which means she retains ownership of her concept but can’t disclose company information.

Still, she has her reservations.

“If they are taking it further we just don’t know about it. Because once you’ve told [them] your idea, they probably won’t call it Splash, or make it exactly like this, because then we could have a case against them stealing our IP.

But it influences their next move. And that’s the whole point of industry partnerships.”

The Dean of Transdisciplinary Innovation at UTS Professor Louise McWhinnie, maintains that companies can’t take student ideas without due credit, and that Jessica’s project allowed her to choose an organisation with legal conditions that she was comfortable with.

“BCII students vote for Industry Innovation Projects knowing the IP position of the partner up front,” she said.

“Once they are awarded the project they voted for, they must acknowledge and accept the IP arrangement to proceed, or they have the choice to work on a different project without the same IP position.

“By joining as an industry partner, the external organisation agrees – at a minimum – to acknowledge by name the student/s for their work if they decide to implement the ideas or information in any form.”

The President of the National Students’ Union Desiree Cai, said IP is not an issue they have encountered, unlike the more prominent concerns around unpaid internships.

But when raised at a UTS Student Representative Council meeting, there was general consensus that students not being credited or paid for commercially successful ideas is “problematic”.

President of the UTS Students’ Association Mehmet Musa, believes students who pitch to industry should get their fair share.

“They should not simply have the ideas taken from them and then used for commercial purposes without a fair sense of compensation.”

Jessica Respall is also on the UTS student council. While students’ rights to intellectual property is not yet on their radar, she believes it will soon be front and centre of discussions.

“I would say it’s definitely an emerging problem that I’ve noticed in my own experience.”

“And I think it’s going to become more and more of a problem because UTS is focused on making sure students have industry experience and [that] they have more of these partnerships.

“I think they need to address the elephant in the room: what’s going on, what does this partnership look like and are students comfortable?”