The NSW Lake Macquarie region, 150 kilometres north of Sydney, has seen an inexplicable rise in the number of asthma hospitalisations over the last couple of years, and findings may worsen under current heavy smoke conditions.

Healthstats NSW has released data that shows that hospitalisations for the area have increased by 55% since 2011-13 and exceed NSW averages.

Dr Steven Maltby from the Centre of Excellence in Severe Asthma, a research centre run from the University of Newcastle, says it is difficult to state an exact reason for such rises, but it could be caused by three possibilities; recognition, lifestyle and triggers.

Dr Maltby says lifestyle changes may have also affected this rise along additional conditions that may worsen asthmatic symptoms, such as obesity or a mental health condition.

“Things like a processed, fast food diet. There’s quite a bit of data to show that that can make asthma control worse and increase chances of having an asthma attack,” Dr Maltby said. 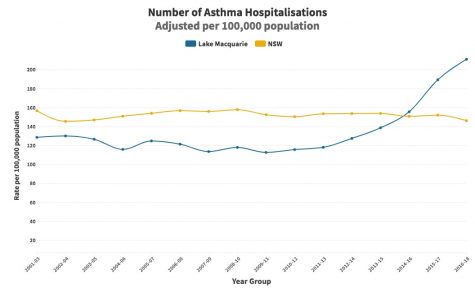 In November of 2016, a Melbourne thunderstorm triggered a large increase in asthma hospitalisations resulting in the death of nine people.

Asthma Australia blamed strong winds that carry large amounts of pollen which are then burst into smaller particles by rain, creating breathing problems for asthmatics or even those who only experience hay fever symptoms.

“That’s just one example of how you can have a perfect storm come together of pollen exposure and storms that can cause quite a spike in hospitalization,” said Dr Steven Maltby, but the effects of that storm reached further than just Melbourne.

*Daniele was hospitalised in Lake Macquarie for asthma when the storm’s effect spread up the coast to NSW.

On that day, she went to work and was having trouble breathing but her Ventolin was not helping.

“I remember going into work that day and walking in through the office, I felt absolutely exhausted,” she said.

She left work for home soon after, her parents came to check on her and the decision was made to call an ambulance.

These asthmatic symptoms have only been an issue for Danielle when she moved to the Lake Macquarie area when she was 23.

“I’m originally from an island,” she said. “So, if I actually go back for a visit, I don’t have asthma but when I come home, I need to use Ventolin every single day. Throughout the years it’s gotten much worse.”

The surrounding Local Government Areas of Cessnock and the Central Coast have much lower numbers of asthma hospitalisations compared to the Lake Macquarie area. 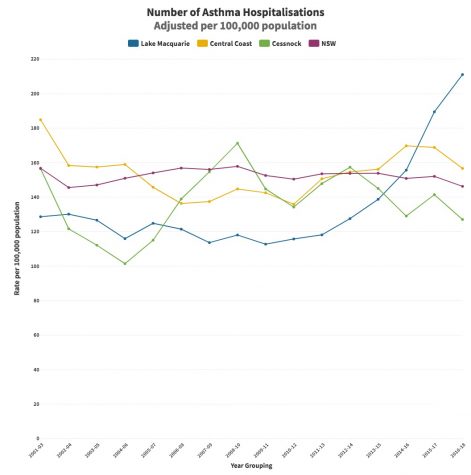 Daniele says she finds her asthma triggers are dust, mould and pollen, although these did not affect her when she was living in Canberra.

“I live on the lake and I think part of it too might be the smoke from the power station. Our house I dust quite often but my rag is always covered in black dust,” she said.

“No, I don’t think anything has been done. I don’t even know if some people take it very seriously. I’ve been to specialists about it because it’s interrupting my way of life.” 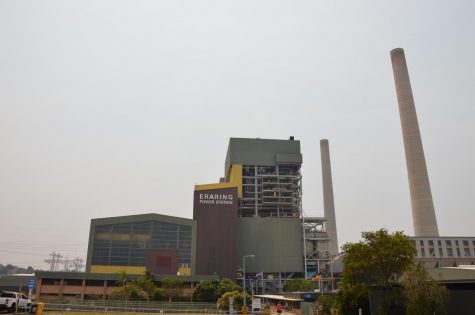 Daniele says that leaving her house is no longer a simple act as she always needs to check if she has her puffer or if the intended location is likely to trigger her asthma.

She finds that specialists treat it as an allergy and do not make a further effort to cure the disease.

“They just put you on stronger medication. I’m on the second strongest. The next one up, they said, is going to give me diabetes and heart disease and this kind of stuff,” she said.

Respiratory and environmental health expert Professor Guy Marks, from the University of Sydney said that viral infections are the most common trigger of asthma, but that there is no reason these should occur only in Lake Macquarie or other specific areas.

“I don’t think we should necessarily assume that it’s related to air pollution… At the moment, it’s difficult to know for sure what the air quality is in that area either now or historically.”

Currently, Lake Macquarie does not have its own air pollution monitoring system so no connection can be made between air pollution and asthma attacks without such data.

Professor Guy Marks says that there are other ways to determine air quality by bringing together knowledge about emissions, atmospheric chemistry, physics, topography and other environmental factors with satellite images.

“We are developing, as a research tool of potential value to government and regulatory authorities, an integrated map for NSW, which integrates data from a whole range of other sources of information,” he said.

“You can blend them together and you can produce quite high-resolution maps which cover the whole of NSW. They enable you to look in more detail at the air pollution concentrations at any particular point.”

Dr Steven Maltby from the Centre of Excellence in Severe Asthma says that one in nine adults in Australia have some form of asthma and that between three and ten percent of those have severe asthma.

“Depending on the year, roughly 400 people die as a direct result of asthma in Australia,” he said.

Currently, further research is being done to work with asthma sufferers to see what symptoms are the most difficult for them and to remedy these with both drug and non-drug treatments.

While no conclusions can be made about whether air quality is a factor in the rise of asthma hospitalization in the Lake Macquarie area, if you are concerned, the NSW Department of Planning, Industry and Environment release data on air quality in major areas updated regularly.

*Danielle requested that her surname be withheld for privacy reasons.