The results of their investigation follow the biggest whip fine of its type in Melbourne Cup history.

More than 90 per cent of all jockeys reported for whipping breaches in NSW are escaping fines or suspension.

That’s according to Racing NSW’s publicly available Stewards Reports, which are uploaded after every country and metropolitan race meeting.

An analysis of reports from 2017 and 2018 shows that jockeys breached whip rules 4500 times, and in a staggering 94 per cent of those cases, no action was taken.

These results come just days after jockey Michael Walker was suspended and fined $10,000 for his treatment of Melbourne Cup runner-up, Prince of Arran.

Walker used his riding crop 12 times before the 100 metre mark, more than double the number allowed. 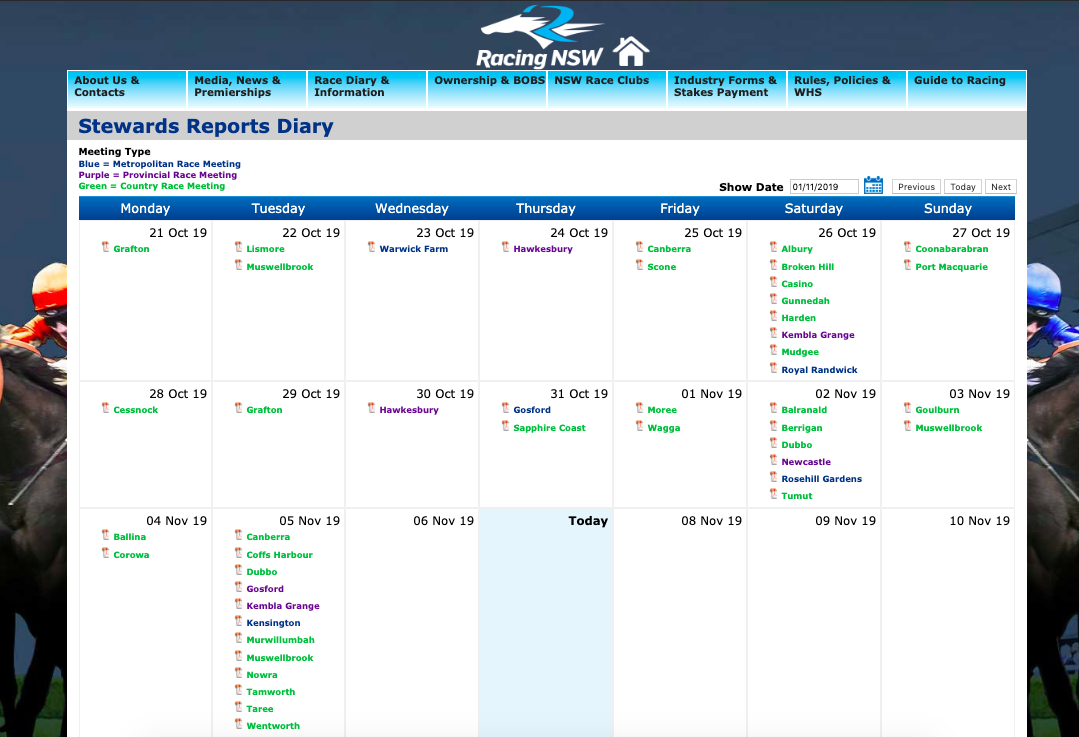 In both Victoria and NSW, jockeys are permitted to whip their horse up to five times in different strides before the final 100 metres of a race. After that, when the horse is tired and at its most vulnerable, there is no limit on the number of times it can be whipped.

On NSW racetracks – from Dubbo to Royal Randwick – jockeys who’ve been recorded whipping their horses up to eight times, instead of the permitted five, are escaping punishment.

And it’s a pattern that has continued well into 2019.

The report below was written and published just weeks ago by the stewards at Sydney’s Royal Randwick. It reads:

“Bearing in mind the totality of whip use, no action was taken.”

This is the standard explanation given for not issuing fines or other penalties.

Whipping can leave an indentation on the horse’s skin, which can often lead to muscle damage or inflammation.

“Nobody likes to be in pain, including animals,” she said.

“If you feel pain you can also experience fear and anxiety so you’ve got some negative emotional states that can come with that as well.”

Breaches of the five strike rule are by far the most common. Other rules regularly being broken include jockeys raising their arm above their shoulder, or landing the whip near the horse’s head.

Phil McManus is a human geographer and an expert in thoroughbred horse-human relations.

He says that there is an incentive for jockeys to use the whip incorrectly, particularly when competing in a significant race like The Everest or the Melbourne Cup.

“You can have a situation where there’s a big race [and there is] the prize money, the pressure on the jockeys from the trainers and the owners. [So,] some riders might think that it’s worth it to get an infringement if they win the race,” he said.

Ms Evans believes that there’s a culture within the horse racing industry that prioritises winning over adherence to the rules.

“These guys are almost wanting to breach the rules in order to get that edge.”

Ms Evans believes that the current penalties are not strong enough to ensure jockeys follow the current whip rules.

“You’ve got rules in place that have been introduced to protect the welfare [of the horses] and yet the stewards don’t seem to be enforcing those adequately.”

Prince of Arran’s trainer Charlie Fellowes clearly agrees. In the fall-out from Tuesday’s Melbourne Cup, he was calling for jockeys who breached whip rules to be disqualified.

Mr McManus also thinks that the penalties for jockeys are insufficient, but says they need to be extended to trainers and owners as well.

“I think more change is needed, both in the industry and the way in which the rules are enforced,” he said.

“It needs to be more broad to ensure that other people have a stake in making sure the jockey rides within the rules of racing.”

There is increased attention on the horse racing industry following revelations in the ABC’s 7.30 program, which found hundreds of Australian race horses suffer cruel treatment in the slaughterhouses they’re sent to after retirement.

The program prompted industry assurances that the thoroughbreds used in racing would be treated well, on and off the track.

But when it comes to the use of the whip, the industry is divided.

CEO of the NSW Trainer’s Association (NSWTA) Glenn Burge, is among those calling for change.

“It’s not enough to say you’ve got the rule, you’ve actually got to have the structure in place to enforce it – because if you don’t enforce it, you end up where we are today,” he said.

Other prominent jockeys and trainers like Michelle Payne, Chris Waller and Lloyd Williams have all publicly stated that whip rules need to change.

The Australian Jockeys’ Association was unavailable for an interview, but in its Statement on the Whip released in October, said that:

“We believe the rules as they are achieve the correct balance between assuring horse welfare, while retaining competitive racing.”

Mr Burge says the statement shows the association is “out of touch”.

The NSWTA says the whip should be used no more than five to seven times per race.

“That’s stage one,” Mr Burge added. “Stage two is that the whip is no longer used at all.”

“Our view is that if the jockeys actually want to be jockeys in 20 years’ time, they better come around pretty quickly.”

*Racing Australia is due to discuss whip rules at its next board meeting.