Environmental laws have failed to address Australia’s deforestation rates, placing further pressure on the climate and the Great Barrier Reef.

Just released research by The Centre for Biodiversity and Conservation Science, shows Australia continues to clear land at an alarming rate.

Almost eight million hectares of potential habitat for threatened species has been destroyed in the 20 years since the introduction of the Environment Protection and Biodiversity Conservation Act (EPBC).

And Queensland is the worst offender. 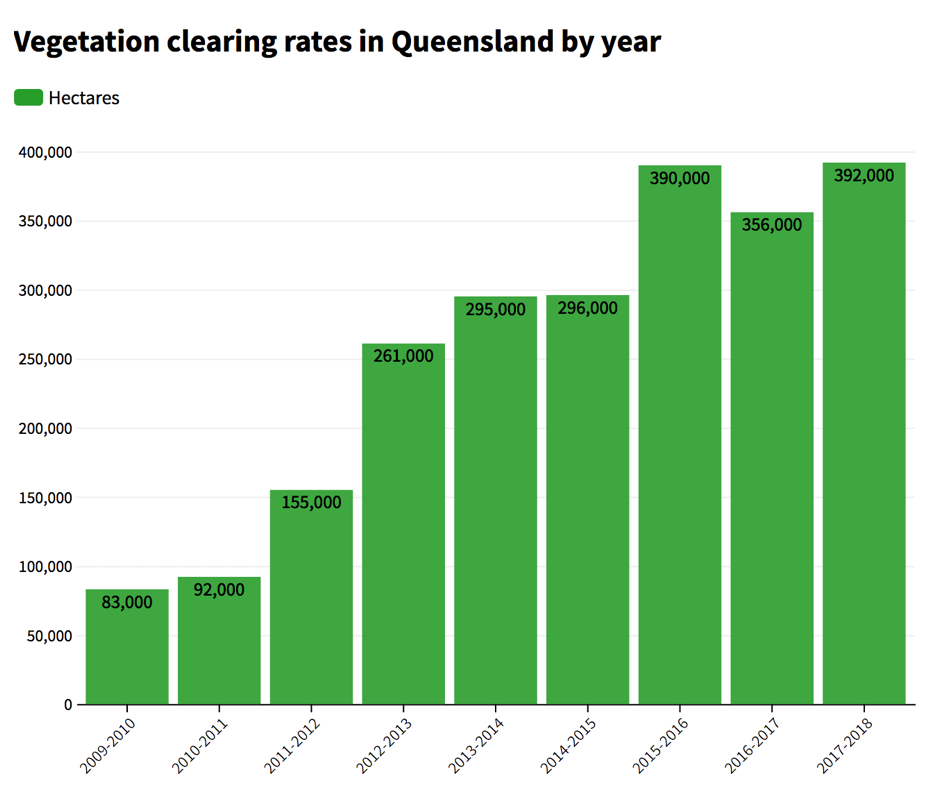 In total, 1136 (61%) of Australia’s 1862 threatened species, are recorded by the Federal Government as having been seriously affected by habitat loss.

One of these species is the koala – an Australian icon.

It has lost approximately one million hectares of land since 2000, and was declared “functionally extinct” earlier this year by the Australian Koala Foundation.

Land-clearing is also a significant contributor to climate change and a source of greenhouse gas emissions,

Trees and plants absorb carbon dioxide and store it as carbon, which is then released into the air when they are cut down.

The 2019 Outlook Report for the Great Barrier Reef was recently downgraded from “poor” to “very poor” due to climate change and land-based run-off, both of which are the consequence of deforestation practices.

The Great Barrier Reef Marine Park Authority states in its annual report that: “the decline in coral cover and lack of recovery coincides with degraded water quality as a result of land clearing… [that, coupled with] “the current rate of global warming, will not allow the maintenance of a healthy reef for future generations”.

Introduced in 1999, the EPBC Act aimed to preserve the potential habitat of threatened species, migratory species and ecological communities by requiring that individuals or organisations refer any planned action that is likely to have a “significant impact” upon the environment, to the Federal Government.

It would then prevent or limit action accordingly.

But the report mentioned earlier found that of Australia’s total habitat loss, 7.1 million hectares (93%) was not referred to the Federal Government for assessment, highlighting the legislation’s ineffectiveness at preserving such areas. 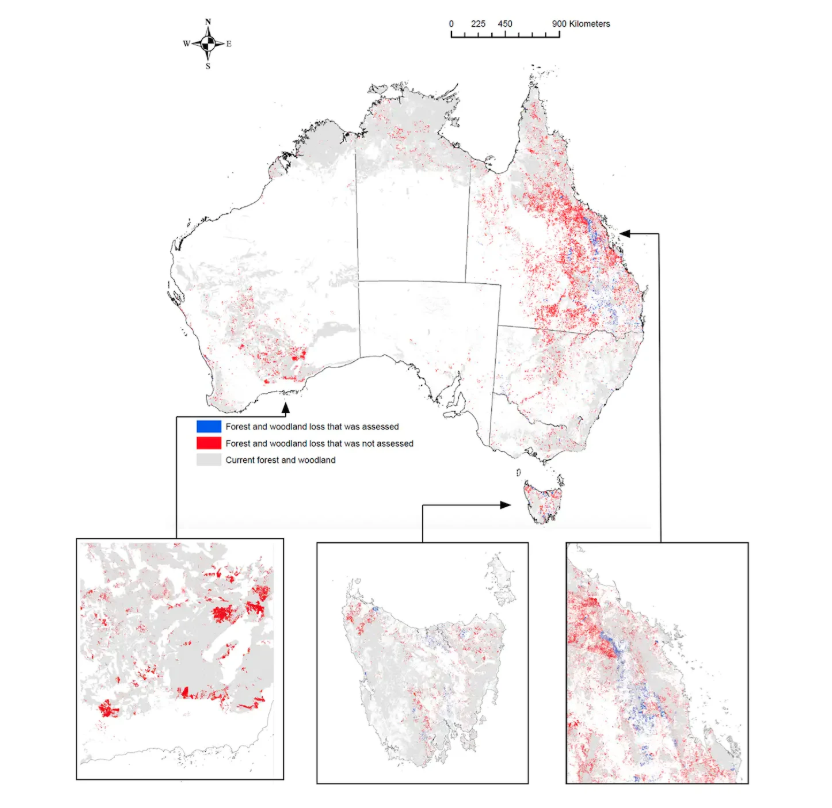 Loss of potential habitat for threatened species and migratory species, and threatened ecological communities.
Dark blue represents compliant loss (or loss that occurred with a referral under the EPBC Act) and dark red represents non‐compliant loss (or loss that occurred without a referral under the EPBC Act). Three panels highlight the southern Western Australia coast (left), Tasmania (middle), and northern Queensland coast (right). (Source: “Lots of loss with little scrutiny: The attrition of habitat critical for threatened species in Australia”)

Livestock pasture is the biggest cause of this destruction with over 90 per cent of the land-clearing in Queensland, for this reason alone.

Protected Areas and Conservation Science Manager Martin Taylor argues that you do not have to bulldoze forests, to “grow” beef.

“The frustrating irony of all this is that livestock and beef in particular are one of the few foods that CAN be extracted at scale from largely intact forests and woodlands,” he explained.

“Beef has a huge environmental impact, but it really doesn’t have to be that way.

“Everything that needs to happen to make beef sustainable has been known for decades now – stop bulldozing forests, stop overgrazing and rest or spell the paddocks to allow natural ecosystem recovery”.

Fast food giant McDonald’s has publicly stated that it has a policy of “… eliminating deforestation from our global supply chains”, with their goal being to eliminate deforestation in their beef, chicken (including soy in feed), palm oil, coffee and the fibre used in customer packaging by 2020.

Similarly, the Australian dairy industry has also committed to a goal of zero net deforestation by 2020.

In March, Queensland’s Palaszczuk Government delivered one of its long-standing election commitments – by introducing tree-clearing reforms that “will reinstate a responsible vegetation management and protection framework.”

The principle being that the laws will protect the state’s climate, wildlife and the Great Barrier Reef.