“At first, I was wondering what was going on, how did they know about my student email address?  And then I started to think that maybe school was testing me to see if I would find someone to write my essay.” – Xinxin Wang, Communications student

Chinese international students at the University of Technology Sydney (UTS) say ghostwriting agencies have obtained their student email addresses without their permission, and are repeatedly bypassing the university’s firewall to entice them to cheat.

At least a dozen students ranging from first-years to third-years – and including domestic students with Chinese last names – have been spammed by contract cheating companies for at least the past two years.

Ghostwriting in Australian universities isn’t new, nor is the spamming of student email accounts, however at least one of the agencies contacted for this report is based in China, as seen in the exchange below.

Top Writer: We will have different writers writing for different assignments so it will be absolutely original for each customer.

XX: …. [the] assignment requires her to do interviews and take photos, I’m just wondering if you can do those too?

Top writer: Are there any requirements for the interviews? Because our writers are all based in China?

Draft legislation introduced earlier this year threatens contract cheating companies with hefty financial fines and even jail time “whether the service is offered from within Australia or from overseas.”

“Contract cheating activity, if left unchecked, poses a significant threat to the integrity and reputation of Australia’s higher education sector both domestically and internationally,” the Department of Education warns on its website.

The thought of classmates using ghostwriters to cheat on assessments is certainly upsetting, but many of the international students spoken to for this report, consider the spamming of their UTS email accounts a privacy breach – and a much greater concern.

Meiqi Fan (pictured above) is a first-year student in the Faculty of Science. She says she feels annoyed and confronted by the emails.

“I’m… constantly getting them without my consent…  I feel like it is kind of an invasion of privacy.”

But a spokesperson for UTS says students can be reassured their information is safe, and that the university does not consider the unsolicited emails to be a security or data “breach.”

“A distinction needs to be made between unwanted emails being received by staff or students, and breaches of the university’s systems containing personal and organisational information,” the spokesperson said.

“… addresses could have been accessed in a variety of ways outside the university’s control, such as through web-crawling bots that search for @uts addresses, or through a fellow student sending them to an outside organisation.”

The emails are from popular Chinese webmail accounts like 126.com and 163.com, and other algorithmically generated domains (DGAs.) They ask students to respond to a different address or to a WeChat account. 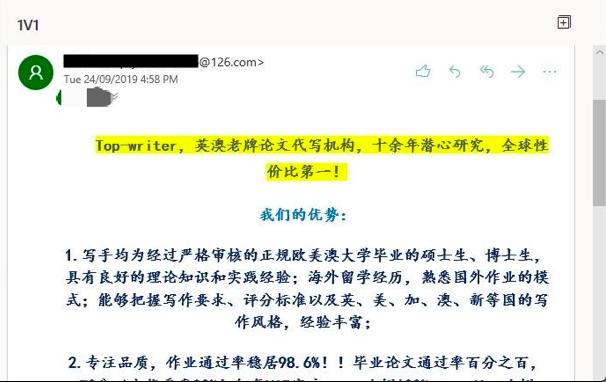 This email was sent to Chinese international students at UTS on September 24 from “Top Writer”. It says its writers are graduates of “Western universities” who are familiar with assessment requirements.

They don’t list their charges at this point but offer discounts in British pounds. (Screenshots on their WeChat account show Chinese internationals at English universities are using their services.)

Students are asked to send their assessment requirements to a different address and include the course, subject; required length; and due date. They are offered a discount if they recommend a friend, and partial refunds if they receive a grade lower than the one they expected. Negotiations then continue via WeChat.

Another email to reach student accounts came from an agency called “UTS Special Tutoring”. UTS Student Services has confirmed that no such group exists.

This agency says it provides writers who are all domestic tutors or Chinese tutors with Masters and PhD backgrounds. It also claims that students won’t be caught cheating.

UTS says it has no evidence of any of its tutors being involved in contract cheating, and is very concerned by the allegation. Its spokesperson cautioned “against believing information provided by contract cheating companies, given they are likely to misrepresent their business activities.”

Misrepresenting business activities would make these emails a “scam” rather than the result of spamming – based on the Spam Act 2003 and information provided by industry regulators the ACMA and the ACCC.

XX:  … if they are tutors from UTS, will they find out the fact that I am asking someone else to write my assignment?

UTS Special Tutoring: Don’t worry. It’s not going to be found out, or we wouldn’t do this for so long.

They’re all our writers.

As UTS warns above, emails and promises like these are often more sinister than just spamming.

“Many sites do not deliver assignments on time, or at all,” they found. “They provide variable quality assignments (including fail grade work), and do not necessarily respond rapidly to user queries. When markers graded work, 52% of cheated tasks failed to meet the university pass standard.”

“Furthermore, many contract cheating sites retain the right to share personal details with third parties under their privacy clauses and require levels of personal identification that leave users vulnerable.”

Xinxin Wang, a third-year student studying communication at UTS, initially thought the emails appearing in her university inbox were a trick.

“At first, I was wondering ‘what was going on?’ ‘How did they know about my student email address?”, she said. “And then, I started to think that maybe school was testing me to see if I would find someone to write my essay.

“After I received more and more emails, I became numb about it.”

Of the four agencies investigated for this report, KJ Essay is the only one to have an official website. It displays a Canberra number (which is disconnected) and says the company is based in Barrine Drive. Google Maps show Barrine Drive is actually parkland on the foreshore of Lake Burley Griffin, directly opposite Parliament House.

Two weeks ago, KJ Essay’s website displayed a gallery of writers, one named Matias Korhonen. A search of his name and profile picture revealed he lives in Helsinki, Finland. When contacted via Twitter and email, Mr Korhonen responded that he is not a writer and that KJ Essay had “stolen” his profile.

Another advertised “writer” Jasmina Amzil, who also lives in Finland, responded that the site must be a “scam.”

A fourth agency to contact UTS students in recent weeks, is Lijian. It claims to have provided assessments for students at UTS, ANU and Deakin and Monash universities, and posts some of its negotiations with students on its WeChat account. We aren’t showing these for privacy reasons.

As with the others, Lijian provides prices based on work length and desired grade. A comparison of those prices is below. 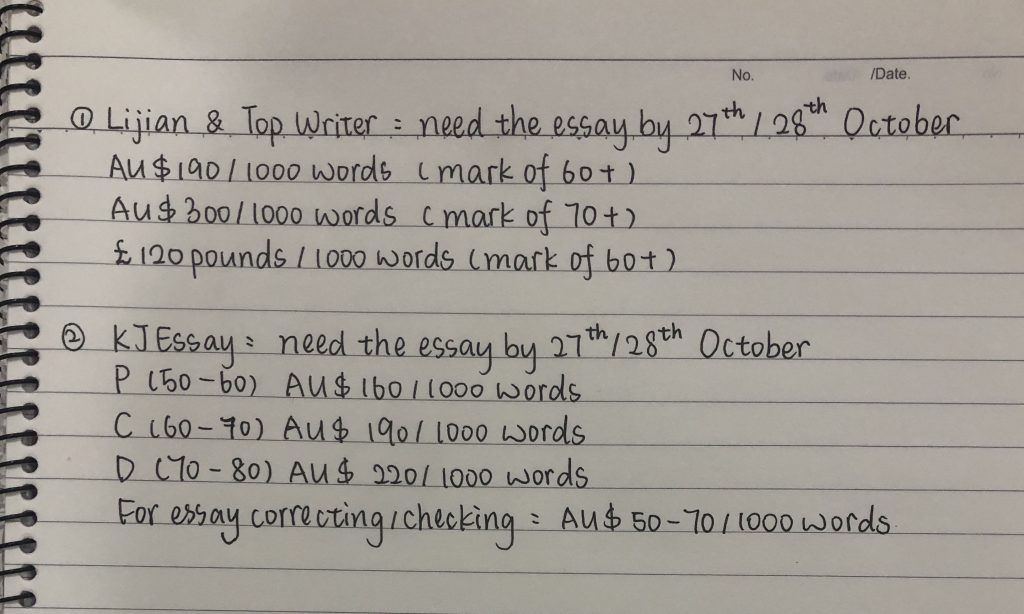 Contract cheating is a global problem, affecting all universities, but the consequences of being caught are serious.

“It undermines academic integrity, which is at the heart of a university’s purpose, and also compromises the reputations, hard work and talent of the vast majority of students who do not cheat,” UTS’ spokesperson added.

“It is extremely annoying. I hate people breaking the academic conduct. It is an issue that they sent those emails through our student email address, but for me, it is not a significant one.” – Hanbo Zhang, Information Technology student

In the meantime, the university has moved to address the issue of student email security.

Whether by coincidence or as a result of this investigation, unsolicited emails from these ghostwriters are now landing in students’ junk folders.

“If students have information about illegal activity such as contract cheating, they are encouraged to report it to their university’s administration, so that it may investigate.”