Punch-ups in a boxing ring and sermons on a Sunday morning seem an unlikely pairing, but for Father Dave Smith they are the key to changing lives.

“I’ve worked with a lot of people who have been slated for death or prison who’ve gone on to bigger and better things,” he explains, as we sit in the Dulwich Hill cafe that has become his morning meeting place. “I’ve also buried a lot of kids I’ve worked with.”

The 57-year-old Anglican pastor of Holy Trinity Church has been boxing professionally for the past three years to raise money for youth programs.

But now he’s facing a new fight, with the NSW Combat Sports Authority calling off his latest bout at the last minute, for safety reasons.

As the oldest pro boxer in Australia, Father Dave assumes it was because of his age. Still, he’s making it clear he’s not giving up. 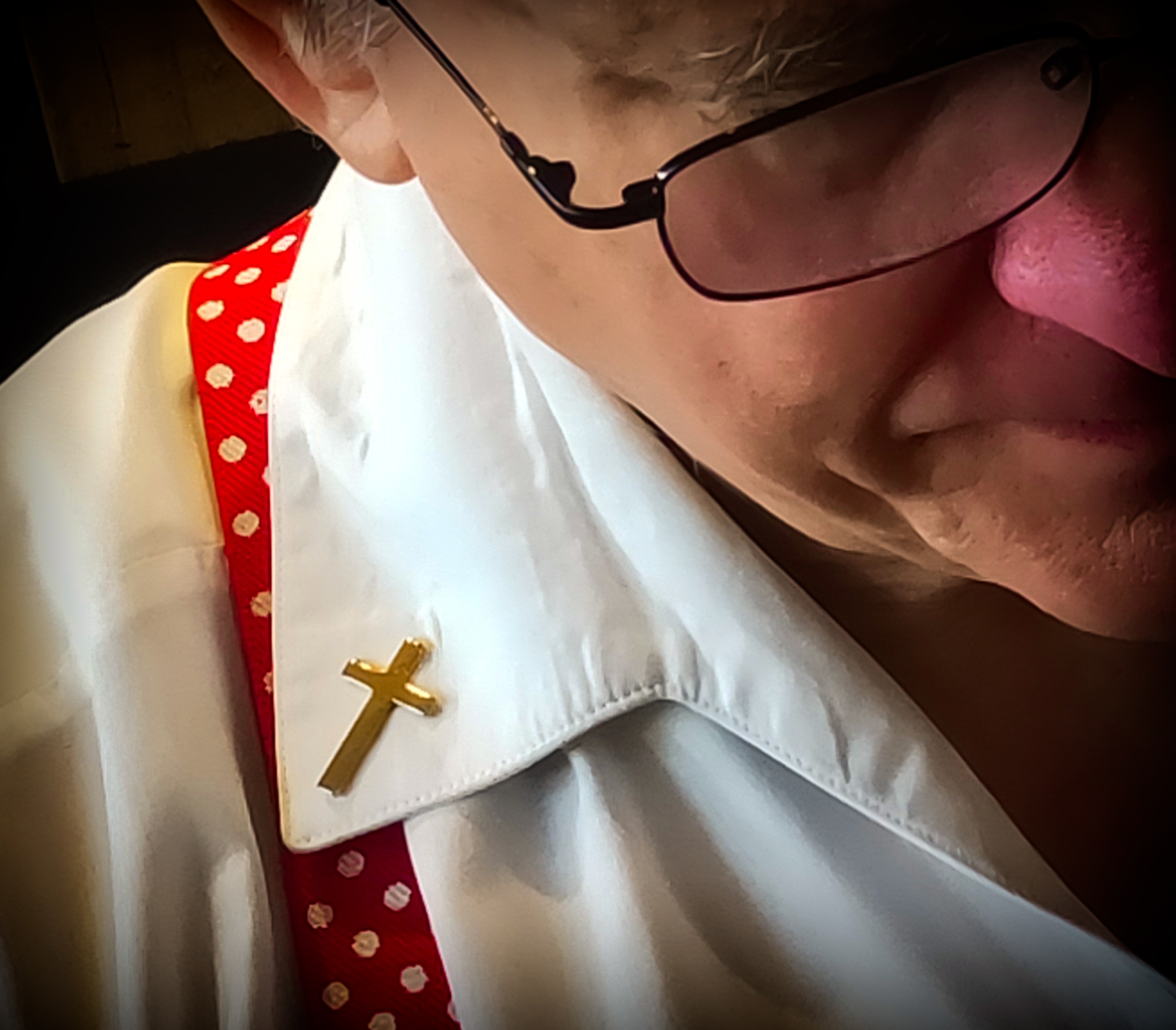 Life for David Smith, or Father Dave as he prefers, was not always religious or honest.

Drugs, violence and abusive relationships were at the forefront of a youth spent deep in the Punk Rock scene of 1970s Newtown.

At 18, his father confronted him, rocking him back to faith and into the Anglican priesthood. “He said, ‘each of us has a moral awareness we can’t deny’. I realised he was right.”

… what I was doing, the life I was living, [the] things I was doing… were wrong.

Religion was not the only thing that pulled his life together. As a Black Belt in martial arts and kick-boxing, Father Dave says the training he received from the age of 17 helped control his anger and emotions after his first marriage breakdown.

“It helped me feel comfortable with myself as a male,” he says. “Becoming a fighter helped me come to terms with having more positive masculinity.”

Boxing and the priesthood may seem like two different worlds with conflicting values. Father Dave laughs as he sips his coffee: “… they’ve always been very hand in glove, so to speak. I always felt life was a fight. Particularly on a spiritual level… what the Muslim sisters and brothers call the ‘Jihad’ against your own self.”

Father Dave channels traditional male values in the local community through his successful “Get Off the Gear and Get into the Ring” program, encouraging youth boxing instead of drug abuse.

Walter Glover is Holy Trinity’s administrator and Father Dave’s close friend of three years. “The idea of fighting isn’t alien,” he explains. “It’s entrenched in the cultural texts of the bible.”

“The way Dave’s applied it – taking young kids who are rough diamonds, disciplining them, showing that there’s something bigger – it’s very valuable.”

Since moving to Dulwich Hill in 1990, Father Dave has seen the devastating impact of drug-fuelled crime. But addressing that is not his only passion.

“It’s like the work we’ve tried to do [to] integrate Muslim and non-Muslim kids in the community,” he says, referring to the youth camps he runs to combat alienation and unity.

“We go bushwalking, train together, box together.” He laughs, then clarifies: “Not Christians vs. Muslims, but everyone in together.”

In the wake of the deadly mosque attacks in Christchurch in March, Father Dave believes tension between faiths has risen.

“When I went and visited my friends at Imam Husain Islamic Centre the day after it happened, that was the first time I’ve ever found the door locked.

There were security cameras looking at me before they let me in. I can understand people feel scared.”

Father Dave admits his relationship with Muslim communities in the early 2000s was troubled and that he had “misconceptions and prejudices, as most white Australians did.”

“We run a camp in the bush which I originally set up for our kids at the church,” he begins.

“A friend of mine from a local school said he wants to book a school camp there. I said ‘yes!’ Turns out this guy is Muslim and booking a camp for Muslim youth. I freaked out, ‘will they be making bongs down there or something?’

“I remember it started badly. We had dogs on the property; a big school bus of little Muslim girls went past and they were screaming because there were dogs barking.

“It was a bad start. But it turned out to be a fantastic camp. They were the most respectful people we had there.”

This is just one of the stories he tells in Christians and Muslims Can be Friends, his second book – to be published late 2019.

After the success of his boxing programs in Dulwich Hill, Father Dave took programs including “Boxers for Peace” overseas. First to Iran, then to Damascus, Latakia, Homs, Tartus and Palmyra.

I took one of our local boxers and boxed with kids on the street, and that was fun. And I thought, ‘we could expand this.’

Now Father Dave is critical of politics and media coverage in the Middle East, especially in Syria.

“I think the reality in Syria is very straightforward. The idea that Bashar al-Assad is killing all his own people is an outright lie. He’s an extremely popular president.”

His fascination with Syria began after watching television reports of the shooting of peaceful demonstrators.

“At the time, I didn’t even know where Syria was on a map, I didn’t know any Syrians,” he says.

“I found myself lying awake at night wondering why I am worried about Syria. I thought, ‘don’t tell me the good Lord has something in line for me there, I’ve got enough stuff on my plate here.’

“Then I bump into a Syrian guy at the local mosque who’s says they don’t believe what’s happening in Homs either.”

We move from the local cafe to a Thai restaurant down the road, and meet two of Father Dave’s close friends.

John Dickson is a local boxer and friend of 14 years. He chuckles: “That’s how we started – punching each other.

“I interviewed him on community radio, he’s well liked. He’s had an impact on me too – given me a few black eyes.”

Father Dave was nominated for Australian of the Year in 2005 and 2009 and has been named Marrickville Citizen of the Year, three times.

He takes a deep breath, and expresses his frustration with public negativity towards his work in the Middle-East.

He relaxes for a moment then adds, simply: “I preach and I punch, those are my two key things.”