Peppered amongst the lush greenery of the Blue Mountains, is a treasure trove of artworks and sculptures – designed to inspire and provoke.

They’re part of this year’s “Sculpture at Scenic World”, an exhibition that has transformed the ancient rainforest west of Sydney, into an outdoor art gallery.

Launched in 2012, it has returned this year with 25 site-specific installations, all located inside the depths of a rainforest.

This year’s major prize of $20,000 was won by Murrembatemen artist Wendy Teakel, for her work; Cycle.

Melbourne artist Elizabeth West created her artwork Cascade for the exhibition. She believes that site-specific artworks become deeply embedded in their environments.

Using salvaged pallet wrapping, she mimicked the appearance of a waterfall.

“Plastics are cascading into our waterways at a scale that is overwhelming,” she said.

“The stillness of this work creates a moment of pause, a space for contemplation … provoking reflection on how we relate to this material”

The rainforest played an instrumental role in the execution of her artwork. Ms West says her initial visits to the site drew out her desire to work with water.

She describes it as: “a fluid process … what’s here that I can work with, how do the elements and features of the site inform and actually become a part of the work”.

Exhibition visitor Helen Newton, described the artwork as very effective: “because it makes sense that it is plastic and it’s not supposed to be here”.

While another visitor, Denis Newton, said that the artwork: “makes sense here” and “blends in with nature”.

The purpose of Cascade is to inspire a change in attitudes towards the environment, not to shame people.

Ms West believes her artwork will trick audiences at first, and create a tension of seeing a natural formation represented by the man-made material that is destroying it.

“Art will always benefit from diverse avenues for display. Public art can create a direct dialogue between the audience and the immediate environment.”

Artist Heidi McGeoch, whose installation Iron Clad was created for this year’s exhibition, says natural settings do not restrict the size of the artwork, unlike conventional galleries.

When she and her team were completing site visits, wind and fallen trees disrupted their work. They subsequently had to “wait for it” (the environment) instead of the other way around. 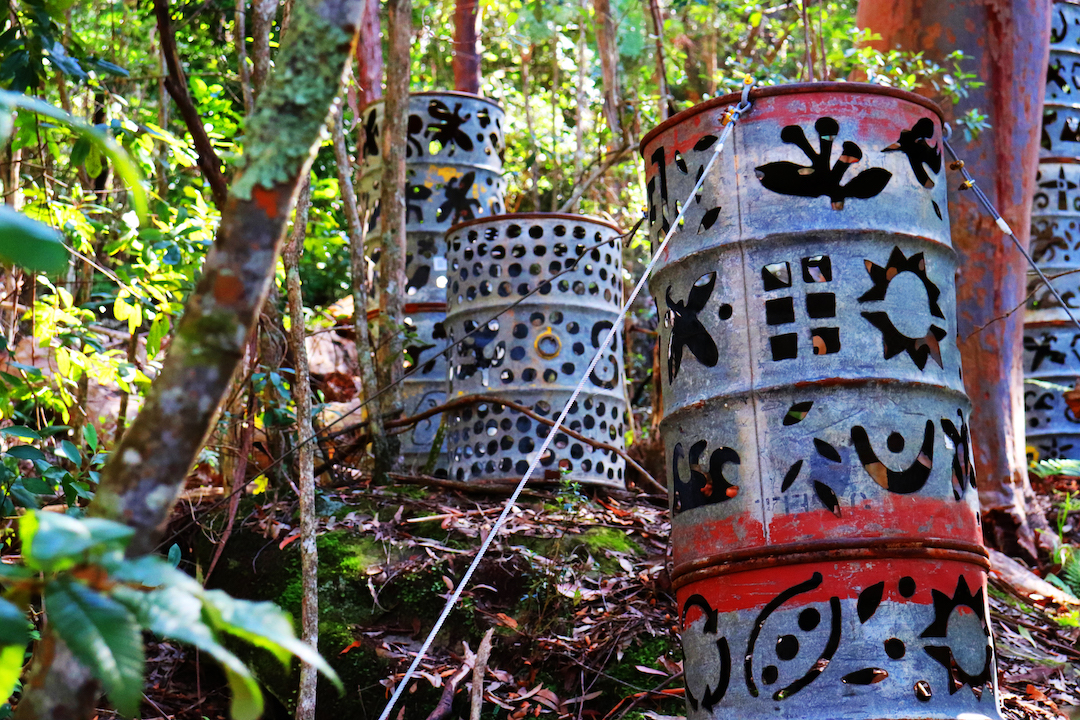 Ms McGeoch’s metal drums are also displayed in Scenic World’s cultural centre. She prefers them outside in the natural surrounds of the Jamison Valley, which used to be a coal forest.

She believes exhibitions like these are important, as they attract many people who’ve never been to a rainforest.

Visitor, Gabrielle, said: “I think it’s amazing … something different, we love to come out into the bush and it’s great to get the kids outside”.

While another nature lover, Michael, said the exhibition is “inspiring for other artists.”

“This is not a still life” by Corrie Furner

“As the world moves I move the world” by Nadia Odlum

“Of loss and finding #10” by Chrystal Rimmer

“In Every Tree” by Kate VM Sylvester