Dr Jim Frazier: the man behind the lens

BOOTAWA: On a sprawling property in Bootawa lovingly named “Tanglewood”, Dr Jim Frazier lives with his wife, two dogs and a plethora of native wildlife.

The vegetation on Tanglewood is flourishing. Green ferns and trees circle the perimeter of the Frazier home. Two koalas lounge in the fork of a tree in the driveway, while a butterfly garden marks the start of the path to the backyard. In the corner, two female peacocks rest in the shade.

Dr Frazier has lived in the region for 20 years. The former wildlife cinematographer can boast working alongside Sir David Attenborough and – as an expert macro photographer – inventing the “Frazier lens”. The eponymously-named lens has a massive depth of field and is still used in Hollywood and on film sets around the world.

These days, Dr Frazier is armed with a quirky sense of humour and a vision for a green future. He says he sees minute but accelerating changes in the climate. 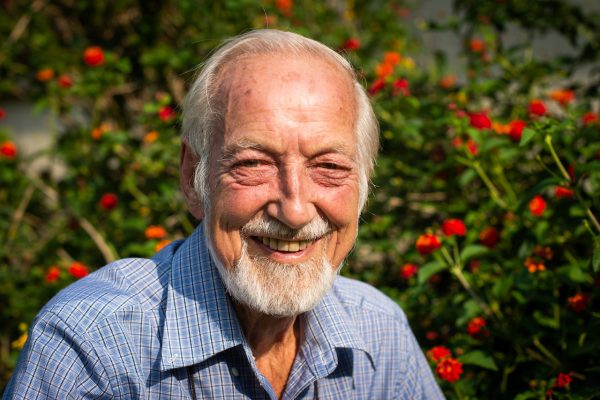 Unsurprisingly, the conversation turns to wildlife.

On the other end of the scale, you have the shark fin industry. What mankind is doing is now crumbling life in the ocean from the top of the food chain to the very bottom of the food chain.

“We depend on every insect out there to put food on our tables. We are literally decimating the things that sustain our living on this earth.”

Dr Frazier agrees however, that there has been a growing, collective consciousness about the state of the environment and the things that must be done to preserve it.

“I think they’re all starting to wake up now. When you look at the kids’ demonstrations, I think the kids are more tuned in than the adults.”

Dr Frazier believes that not enough is being done on a large scale to implement renewable energy in Australia and to utilise its unique geography – such as desalination plants and wave turbines.

“Climate change is very real at the moment, make no mistake about it. It is created by man, no question. I would like to see wave power used all around the Australian coast. We should have electric cars, which are less of a strain on the environment than diesel – and petrol driven vehicles.”

Taking it easy at “Tanglewood”.

Some of the animals who’ve found a home at Jim Frazier’s Bootawa property (Photos: Mark Kriedemann)

Dr Frazier has been working for many years on creating a film called “Symphony of the Earth”. It ambitiously aims to combine the beautiful sights and sounds of nature with the talents of the best entertainers in the industry.

If it happens, he hopes the film will act as a wake-up call for humanity to act on climate change.

*This story has also appeared in the Manning River Times (Taree)