The road to redemption: unlocking prisoners

There are only ever two directions. Up or down. Left and right do not exist. They are a mirage that have people walking in circles. In the end we must all decide – move forwards or go backwards.

For prisoners, it’s in or it’s out.

I was a tourist in my own town. In a borrowed car I headed north, taking the exit “Neerabup Road” from Perth’s Mitchell Freeway. For three kilometres I drove, before turning right into his street. A cul-de-sac. “Of course he lives in a cul-de-sac” I thought. Stalling the car upon a couple of calendulas, I was still happy with my park, knowing very well this would offend some neighbours. Stepping out of the car I walked the direction just driven. Stopping at the house numbered “4”.

The grounds of this house were most handsome. It made no sense that the windows were covered with such sadness. Like a school canteen that is locked after hours, the block-out blinds were keeping something out.

Inside, was a home. Family photos were framed and lined up along living room cabinets. The face of the fridge – an uncertain colour – featured polaroids, digital prints, vouchers and ornaments. The family supported royal blue and gold – a reminder that I was not in Fremantle anymore. Taking a seat at the counter, arms resting on the bench, I watched as Cailin poured me a cup of water. “So odd”, I thought, to see somebody play the role, yet out of costume.

Cailin Johnston was endearing, yet did not look like the social type. He was young, yet looked like he had lived half a lifetime. Perhaps that’s why he kept a “rat’s tail” haircut – to show there is still young blood flowing inside.

I was close in age, comfortable, but unsure how to speak to him. He had asked three times in the space of four minutes if he could get me a drink. “He doesn’t listen”, I thought, until realising I was the one who’d heard him wrong. So I gulped the water and told him I’d have what he was having. Knowing very well he wasn’t having anything.

More scattered than a crossword, he moved between rooms. In the open plan living area, he jingled the keys now in hand and mumbled something about “picking something up”. Then he was gone. I was annoyed but not confused – because that would mean I didn’t understand. And I did. Four weeks, I’d been speaking with him. His replies were rare, but I’d been okay with this because I knew I’d be seeing him soon. And there I was… and Cailin was not. “Only a criminal could be this intriguing.”

But Cailin was not a criminal. Treated like one? Yes. For the 14 months he’d spent locked up. The system called him a “prisoner-on-remand”, but what are men like him called when they’re released without a conviction? Innocent? Yes. It’s what I wanted to know. So I stayed and waited, entertained by the situation until Cailin returned.

Now comfortable, we took a seat – out back.

Like an adult who uses toys to interact with a child, I asked Cailin why he was playing with his phone. “Like muffin but with an ‘n’… nuffin,” he said. I then watched as he took calls from friends. “They just be callin’ from inside Hakea.”

“Look what it does. How it tears a family apart.”

Hakea is the West Australian prison where Cailin slept for 415 nights. He didn’t say much about those nights, or even the days. He was distracted by his mother Paula arriving home from work. She opened the fly-screen to ask Cailin why he was texting her knowing she was right inside, and to answer they already had beers. Cailin said they were going to need more.

It was not long before I saw the pain in Paula’s eyes. She spoke of how hard it was – 415 days – not one restful night. “Her son was guilty”, she’d thought for three months.

“This assignment of yours, once done, turn it to [being about] meth. Look what it does. How it tears a family apart.”

Cailin had been troubled since he was young. But after those initial three months, it took one visit to him behind bars for Paula to know her son  was in the right and “they” (the police) were wrong.

I looked at Cailin: “He is out but he is not free”. Locked up in his house all day, fearing those who put him on the inside. As the day grew dark, I got his story. Then, when ready to leave, he walked me out, asking where I was going. “Down the freeway,” I said. As we walked to the car we laughed at why I had parked so far away. With Cailin on directions, we drove for two blocks. As I let him out, he thanked me for listening and said it meant a lot. I replied I’d see him on Sunday to get his story on the record.

“Ours is the long day’s journey of the Saturday.”

But that didn’t happen.

In an interview with French journalist Laure Adler, George Steiner explains why he wrote the words: Ours is the long day’s journey of the Saturday.

It follows the Friday-Saturday-Sunday schema from the New Testament: Friday is the death, Saturday the uncertainty, and Sunday the rise. “We live through catastrophes, torture, anguish; then we wait, and for many, the Saturday will never end,” he explained. “Those who choose suicide are the ones who say there will be no Sunday.”

Cailin believes in Sundays, although he’s still figuring out how to get through the Saturdays.

For many prisoners, it is hard to imagine a Sunday. It is why recidivism in Australia is at 60 per cent. If humans are conditioned to live in one of two ways; despair or hope, which one is prison? Joel King is one who’s broken the vicious cycle.

A uniformed officer for half that time, a detective for the rest. On this particular morning he sits facing the beach. he explains how he’d gone home one day and told his wife he was sick. Sick of locking people up. “I want to unlock them”, he’d told her. Chris spoke of how he had taken a walk in almost desperate prayer.

“Prison is meant to do one of two things. It’s either meant to rehabilitate or it’s meant to punish. But I don’t believe it does either.”

A month passed before he met one of Perth’s biggest builders, Gerry Hanssen of Hanssen Construction. Call it coincidence, but in that meeting Gerry asked how Chris was enjoying the Force. He answered with what he had told his wife. Another month passed and Gerry reached out again. He asked Chris if he would come and work for him. Chris asked, “as what?” Gerry responded: “whatever it is that you have been praying for,”

To leave a job offering lifetime security was not a decision to be reached easily – not overnight. So, Chris told Gerry that he and his wife would be taking a little long service leave and he’d return with an answer. They went to Europe for five weeks, flying from Rome to Singapore before joining a cruise back to Perth. Chris had told his wife that it would be on the boat that he would make up his mind.

And it was – at the first sunrise.

Chris was wide awake and walking the deck. Looking out to the water, he asked himself what he should do. Go back to the Police Force or take this new job? “God give me a sign, give my wife a sign.”

It came at sunset. Stopped on a stairwell on their way to dinner, the couple ran into Gerry Hanssen. Their decision was made.

Chris and Gerry started to take on prisoners coming out of jail – to help them rehabilitate. Chris now looks for two things. Do they want to change, and do they want to try and help somebody else? Their system only works if the baton is passed along. Prisoners out for six months or more look out for the new guys on their building sites. It’s about leadership. It’s about building a community. 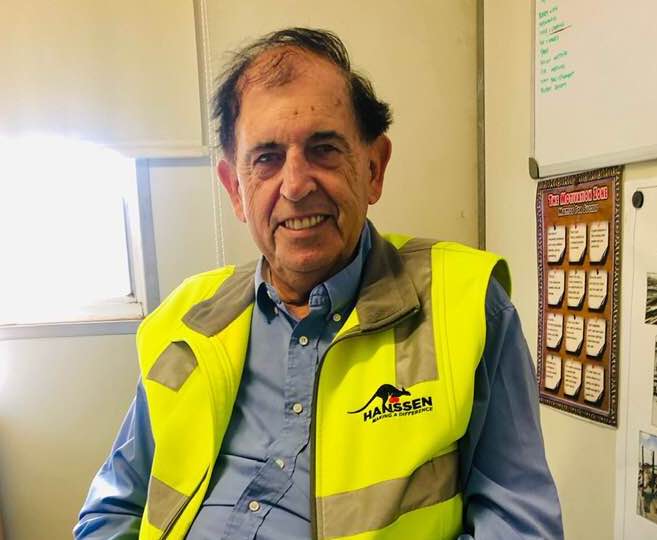 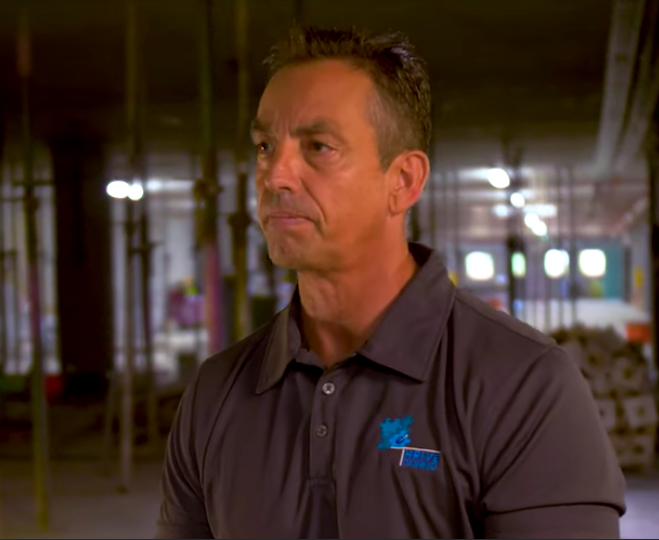 “Before we just built buildings… now we’ve actually made a rehabilitation centre… giving everybody on site meaning and purpose and more of a reason to get up and go to work than to just build a building. [Now] we are building lives.” – Chris Bown

*For more information on Chris Bown’s program visit  Thrive Training, and if you or anyone you know needs immediate help, call Lifeline on 13 11 14.

*Featured Image: Chris Bown (on knee) with a group of ex-prisoners – at work on a Hanssen site in Perth.)